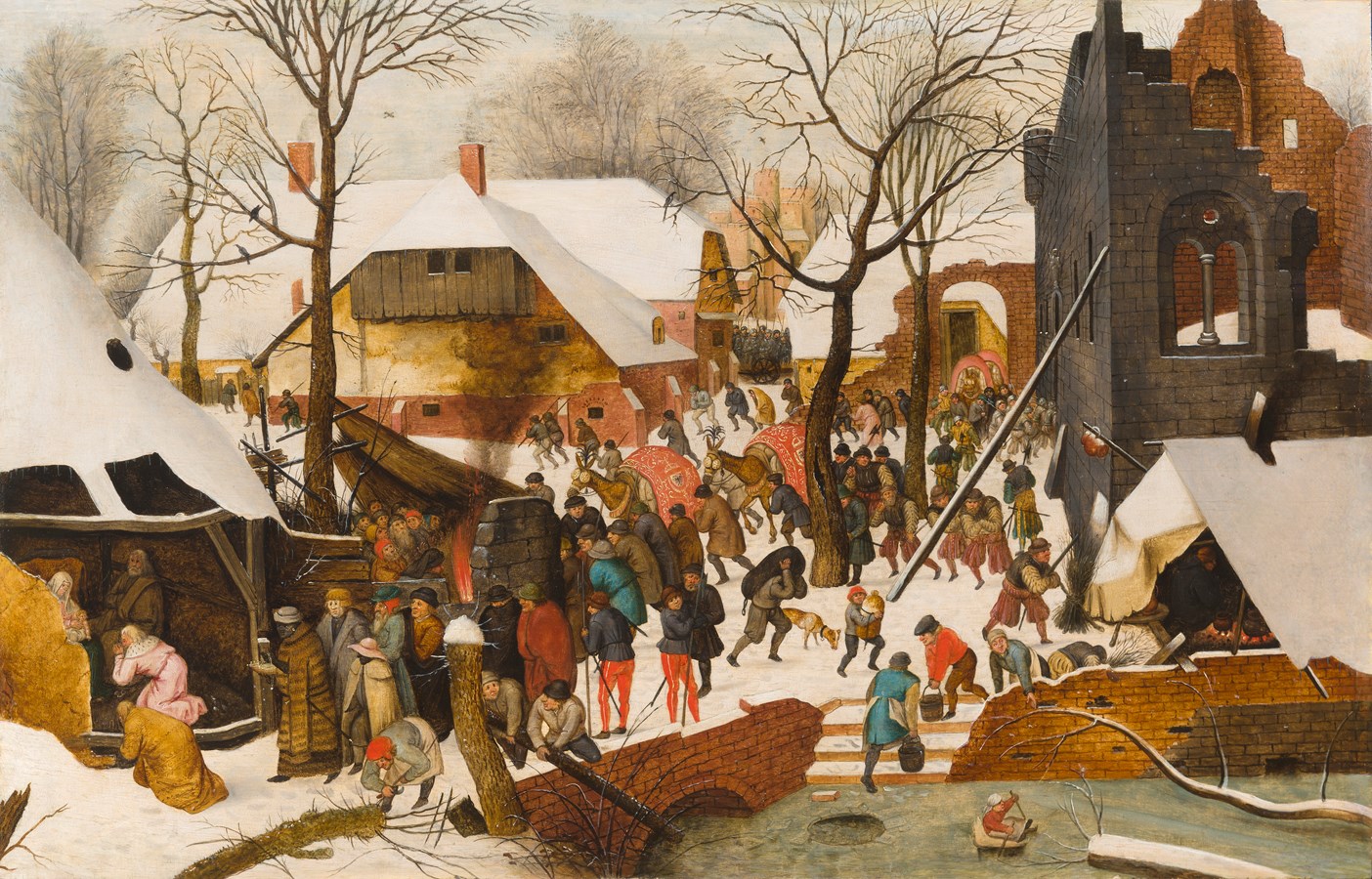 The painting we present was acquired some twenty years ago by a French collector, a savvy connoisseur of Old Master paintings. Listed since the 1950s, this version of the famous Adoration of the Magi by Pieter Brueghel the Younger was published in the catalogue raisonnée since the first studies on the painter by Georges Marlier in 1969, resumed later by Klaus Ertz (consult Opus quoted above). Its condition, underlying drawing, as well as the beautiful pictorial material are all elements that make our painting a vibrant, engaging work dear to us.
The prototype of this composition, created and executed by Pieter Brueghel the Elder, is now housed at the Oskar Reinhart Foundation in Winterthur, Switzerland. The work on panel, signed and dated 1567 is a work of a great invention and is certainly one of the very first depictions with "under falling snow with big flakes" in art history. It is not certain if Pieter Brueghel the Younger had the opportunity to see his father’s work, but there are thirty-six versions of this composition continued by the "Brueghel Enterprise" justifying the popularity of this interpretation of the Adoration of the Magi (consult The Brueghel Enterprise, Maastricht, Brussels, 2001 - 2002, pp. 149-159). Only three works by the son continue the falling snow motif.
Son of Pieter Brueghel the Elder, a genius painter and immense creator, Pieter Brueghel the Younger quickly realized that the works of his father were timeless and popular throughout Europe. He used his talent as a painter at the service of the efficient and poetic repetition of his compositions by developing a technique of rapid production associating tradition and modernity in order to meet the high demand from collectors of the time. For they were so eager to own a work from the Brueghel universe.The painting we present, Adoration of the Magi, is a brilliant illustration of this.


ANALYSE OF SOME IMPORTANT DETAILS :
1. The religious pretext
Transplaced geographically and 'climatically', the famous Biblical passage is transposed from the aridity of Bethlehem to a modest, snowy, 17th-century Flemish village. Relegated to the left-hand inside corner of the composition, the episode is an integral part of the work, seeking to show that it lies at the heart of daily life.
2. The political context
The horses covered in blankets bearing the coat of arms of the Habsburgs are at the centre of the work, and evoke the political context of Flanders, a province of the Spanish Netherlands, states of the Holy Roman Empire, attached to the Spanish crown under Habsburg rule from 1556 until 1714.
3. Daily life in paint
Brueghel's composition invites the viewer to contemplate the poetry of simple things and activities of everyday life: water-carriers, skaters and woodcutters enliven the works with distracting scenes.
4. The drawing beneath
Drawing remained at the heart of Brueghel's technique, enabling the rapid reproduction of compositions. Here clearly visible, it is drawn directly on the panel, to which colour is then generously applied.
5. The clover-leaf mark
The mark appears on the back of the oak panel, the support of the painting. It is the stamp of the maker of the panels, Michael Claessens, and symbolises the collaboration between the different trades in 17th-century Antwerp. On the back of the painting there is also the emblem of the guild of Antwerp, a sign of the master's acceptance by the city's association of artists.