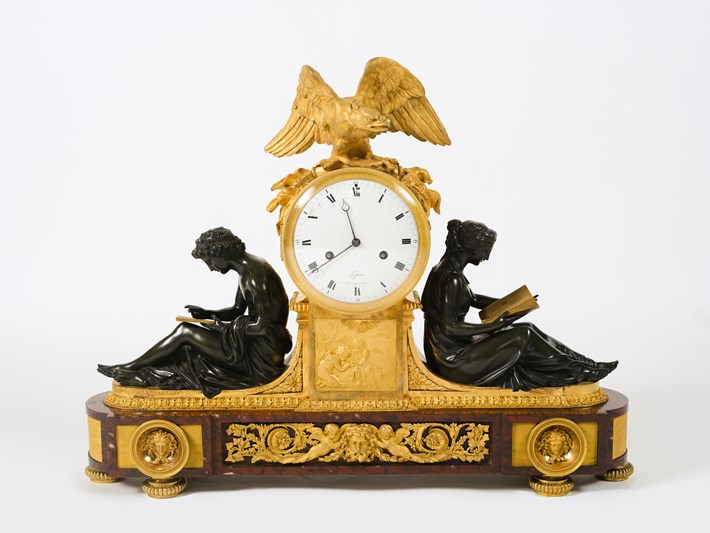 Empire period study clock, Movement by Jean-Joseph Lepaute (Bièvres 1770 – Paris 1846)
Origin: Paris around 1810.
Pendulum called "to study" or "to the marshals" in gilded bronze and cherry marble. Enamelled dial signed “Lepaute, Clockmaker to the Emperor in Paris”. Dial surmounted by an eagle with thunderbolts. Movement placed on a bas-relief base with putti playing with doves and framed by two patinated bronze figures symbolizing study and philosophy. Morello cherry marble base decorated with foliage, masks including two jellyfish, and cupids.
This clock takes its name “aux Maréchaux” from the examples that Napoleon I gave as gifts to his Marshals. The model created at the instigation of the merchant-mercer Daguerre was executed by the bronzier François Rémond in the years 1785, with figures originally created by Louis-Simon Boizot for the Manufacture de Sèvres. We know of several copies with variants, preserved in particular at the Élysée Palace, the Ministry of Foreign Affairs, the Palace of Versailles, the Quirinal Palace in Rome, the Victoria & Albert Museum in London or the Palace of Hermitage in St. Petersburg.
Jean-Joseph Lepaute is the heir to an important dynasty of french watchmakers. He was first watchmaker to the King, then to the Emperor. He designed the clock for the Paris Stock Exchange, and carried out imperial commissions for Saint-Cloud, Fontainebleau and Compiègne.

- Pierre Kjellberg, “Encyclopedia of the French clock from the Middle Ages to the 20th century” Amateur editions; page 259